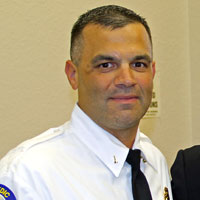 Jason Martin began his public service career in 1997. He began working with Lee County EMS, he then attended Southwest Florida Fire Academy and was hired by Iona McGregor Fire District. He has been promoted through the ranks and is currently a Lieutenant/Paramedic. Jason also serves as  a Rescue Officer with USAR FL-TF6. Jason Martin has been an instructor for the Southwest Florida Fire Academy for over 10 years. Jason has an extensive training background and has been the lead instructor in several disciplines. Jason has also been the advanced class coordinator for the past several years. In June of 2014 Jason was given the opportunity to be the coordinator.